NYSE vs NASDAQ: What's the difference? 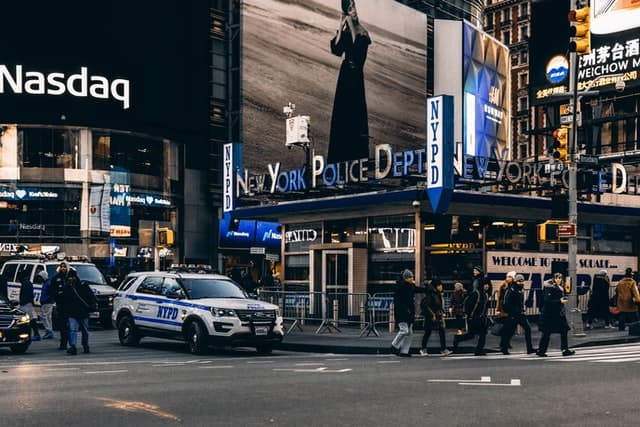 The New York Stock Exchange (NYSE) and the National Association of Securities Dealers Automated Quotations (NASDAQ) are the two largest stock exchanges in the world and both both exchanges are based in New York City. Both exchanges have the same opening and closing times and the same market holidays. It is not hard to understand why these exchanges are often confused.

Today, the stock market floor is mostly empty. Trading has moved online. Buyers and sellers are matched almost instantly by complicated computer algorithms instead of by people.

NYSE is perceived as being for well-established companies. Stock prices are more stable.

Entrance to the NYSE

NASDAQ is not as old as the NYSE. It does not have as much history but it almost just as large. NASDAQ was established in 1971 and is the second largest stock exchange in the world. Although the exchange is officially based in New York, there is no physical trading floor. All trades are handled electronically with what is simply called an Electronic Communication Network (ECN).

NASDAQ is perceived as being for tech oriented stocks are are growth oriented and potentially more volatile. However, there are no official rules about this.

The primary difference between the two exchanges is how buyers and sellers are matched. The NASDAQ uses a dealer's market. This means that buyers and sellers are not buying directly from one another but rather through an intermediary. The NYSE uses an auction market. This means there is no middleman. Rather individuals are matched using an auction system where the buyer with the highest bid is matched with the seller with the lowest ask.

NASDAQ was always a for-profit exchange. In fact the exchange itself is publicly traded. The NYSE was not-for-profit for over 200 years until March 2008 when the NYSE went public and thus became for-profit. This illuminated one of the last real differences between the two exchanges. The two exchanges are even owned by the same parent company – the Intercontinental Exchange.

Today there are few tangible difference between the two markets. The two exchange make up the bulk of stocks trading in North America. Despite their similarities they are wholly separate exchanges. Any online stock broker that lets you trade on one of the exchanges will let you trade on the other as well. Which exchange a stock is traded on should have little impact on your stock picks, but it is still good to understand how these markets work.